The Day I Land My Foot In KL

Suddenly just felt a little sentimental about how I landed here from a humble city of Melaka. Upon getting the offer letter from TAR College, Wangsa Maju, I was so eager to come over. At that point of time I have not find the accomodation and had to bunk in with my friends house in Menara Alpha, Wangsa Maju. As a stranger to KL, I was so excited when I first landed my foot here. Thanks to John Chang, I got a place to bunk in, I still remember the address in Wangsa Maju, it was A-14-21. 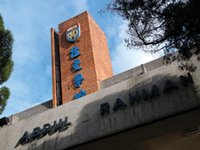 I first remember vividly the first day of my TARC days, orientation day, it was either DK B or C. Sat at the very last row with a long hair guy and joined later with a fat guy. Then we were exchanging the normal introductory lines like "What's your name?", "Where you from?", etc. Then, our eyes where targeting as usual, the chicks. As we were in the Business School, there were plenty then, for the first time, my fatty friend, Feirim got to know one pretty lady who in the end, who knows, became my gf. Chong became my best mate then, fetching me to and from college most of the time on his Yamaha SS Cub. I was at the same time in the same tutorial as Crystal then.

Those were the TARC days. Staying in one of the most prime place in Wangsa Maju, there are BRJ, Zatimanis & MRJ to keep our night life active. There are plenty of variety on food, you name it, you got it. I still remember the snooker centre we used to frequent, above Zatimanis, we will play a few games then play Kuda machine. And also plenty of Cybercafes, still remember the counter-striking days with Guninkia & Fatty. Then just below the condo I stayed, there is this Blue Cage, our normal bunk place with Ah Bo, Sek Chai & other Terengganu-ians. We used to watch the serial "Threshold of An Era" there. I remembered once, everyone was betting on RM 10 to make me jump to the pool, which I did. And over there, in Wangsa Maju, during my college days, I had numerous encounters with girls, my first gf in college then was Ploy. During my days with Ploy, we had our fair share of good days and bad ones. Overall, I still cherished her presence in my life before. Then after that, a few girls down the line who I had crushes with but did not turn up a steady one. Towards the very end of college days, I got to know my current gf, Emmery in person, closer than before as a friend. I also got my first tattoo during the college days. Up to date, I got a total of 3 tattoos. On both of my upper arms and one on my back. 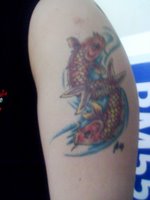 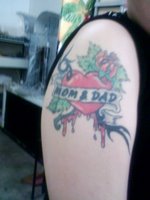 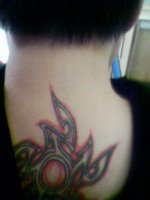 Upon diploma graduation, whereby Chong is continuing his studies in advanced, Feirim decided to venture into his steady job which he loyally still doing it in Selayang Mall where I continue my journey starting my first professional job in KLIA, I was then staying in Nilai, Taman Cempaka. Dead place, nothing to shout about during my days in Nilai, but it was during that time I started my 2nd serious relationship with Feirim's colleague, MahSiewLing. Nothing to shout about the relationship though and we had a bad break up but still remain friends. I will then travel whenever my off days to KL to meet up with Feirim and my gf then.

Then the opportunity arised, I switched job, was attached to Scott & English as a Sales Executive then. Luck was on my side then, even without much visits, the sales were pouring in and those days were my glorious day, would frequent clubbing often. Was actively wasting my nights at then Emporium, Beach Club, Viva & Q Bar. And then were introduced to another fun place by Chong, WARP discotheque. Those were the days, now we have ThaiClub, Poppy Garden, Passion, Loft, etc. But I still prefer the old-skool days. I was still loyally staying at Wangsa Maju, same house as I had been living during my college days. 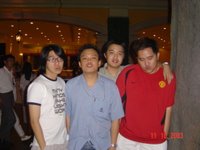 Then were promoted from Sales Executive to Product Executive. It was at this period of time, I started to get close again with my current gf, we would catch up for a drink, I would then drove all the way from Wangsa Maju to Subang USJ to fetch her. Slowly, we felt we were meant for each other. It was then year 2003. It seems then my life is complete. There were also a point that I had to bunk at Feirim's place for 2 mths. It was a memorable stay, with his mom getting my dinner ready most of time and I helped to clean up his messy room. Nice place to stay minus the traffic that I had to bear everyday to office. There was one time, we hang out for too late and his father changed the pad lock, and we had to bunk at Albert Yap's place.

Then from there, I moved to my own place. A place I would call home. I bought the furniture, the electrical appliances, cleaning, decorating all by myself. Then I went steady with my current gf, Emmery. Years in, years out, a lot of things changed, from Scott & English, I joined LG as Assistant Product Manager only to work for a year before I switched line again to Event Management company. Now the yesteryears felt like it had gone in a blink of eyes. I still longing for yesteryears. And at the same time, I am hoping the coming years will be good.

What Is A Manager?

So I sat down.

DC : Company banned MSN for a reason, even myself also cannot use it but somehow I found out you got your own way to MSN.
(I was thinking to myself that time, I am smart enough to find a way. There's saying, when there's a will, there's a way)

DC : I hope you will stop your MSN and get your things done.
(My boss face turning into Justice Pao face)

DC : Don't always wait for business to come. When you want to go to visit the 3 branches of Maybank that I asked you to? I am too busy myself to handle this things already, you should take up the responsibilities.

Me : OK, I will do the reporting to you tomorrow. Anything else?

Yes, he is trying to find my fault. He commented that I sit down and wait for business, when I first join this company, I did asked him if he wants me to contact my network and seek business or not, he said we are too busy to do that. As my boss, you always condemn me, have you ever in your sincere heart, compliment me for the jobs that I had done well? Nothing. Do not say that I wait for business. When I was in my previous industry, I am once the best salesman. Your whole company turnover per year cannot even fight my personal sales figure. As my boss, have you ever listen to what I said? As my boss, have you ever defend for me when the client asking for the impossible? Do you know what is the meaning of a "MANAGER"? Have you manage your people well enough? I am not school leaver nor I am brainless, have you ever talk to me in a proper manner? In a more civilised way? In front of me, you can condemn the client like there's no tomorrow, but when you face them, you are as timid as you are. I will start to ignore you cos you are an insult to my intelligence, cos you will be a pain in my ass. No worry, I will go out more often to report what you want.

Back-up plan for me soon. Friends out there, keep me inform of any suitable vacancy k. 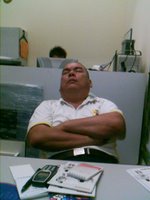 My colleague sitting behind me. Loud motor-boating.
Posted by MikeM at 3:20 PM 2 comments:

Message to My Daddy 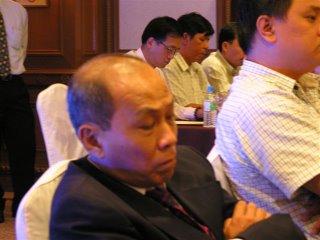 Someone sent me this picture, it made me realised how I miss my dad after 2 months not being able to back to Melaka due to work commitment. It also made me realised how age caught up with my dad. Called him and chatted with him for a while, he seems happy judging from his tone on the phone.

Dad, I would love to come back to help you on your business, I know it has been always your dream for us to help to run own business. But trust me, it is just not the time yet. I have alot yet to learn and sincerely I want to fulfil your dream. At times, I know you might have been thinking alot on our behalf for our future, we frankly appreciate every bit of your words and advices to us. I as the eldest in the family, will not let you down, I promise you. Dad, it had been a while, but I just want to get my message clear and through to you, "I Love You"
Posted by MikeM at 3:21 PM 4 comments:

Today Monday : To me every morning is the most glorious day, it will determined how the rest of your day will be. Looking at my title above, it should summarized how was my day. The story began last Friday. I was assigned for outstation jobs, 3 at a time and need to come back on the same day. Left office Friday morning, went to 3 places, Pasir Putih and Sultan Idris Shah in Ipoh and Kuala Kangsar. To my disappointment, we actually went there for nothing as the jobs was not properly assigned by Maybank HQ. So came back to KL again, went for futsal. Good futsal session : scored approximately a double hattrick that day but hurt my back.

Saturday supposed to be a working day for me but I just couldn't make it with my aching back. And my phone just got barred for exceeding credit limit, so I used my gf's handphone to SMS my brother, Kenneth. So I took a good rest and came back to work on Monday morning with full force. So I went upstairs to see my boss, updating him of all the jobs pending and oncoming jobs. But he sounded me with his dark face saying in future please inform him if I ever take an MC. OK, I admitted it was my fault for not informing in a proper way but you do not have to show me your colors to me, I am a human too. Not only that, I was blamed for the failed job for VISA in Giant, Shah Alam. After a few minutes of verbal fucking, I went down, head low, asking myself do I deserve it? That spoilt my Monday totally. To add salt to the wound, I was again screwed by my clients for nothing. A glorified day gone just like that, and it is just 11am now. To the extent of me thinking of switching job again. Yes, you are the boss, but have you ever really delegate your job like a manager to me? Do we have a daily meeting to see what is pending and what's done? Everything is so hay-wired here. Communication, delegation of jobs, etc.

MikeM
To stand still is to lose, to move is to gain, to change is to win.